Forbes is reporting that only about 89,000 people bought private long-term care insurance in 2016, a nearly 14 percent decline from 2015, according to an industry survey.  Nearly all were bought in the individual market, though about 15,000 people purchased coverage through their jobs.

The sales decline continues a stunning trend. At the market’s peak in 2002, consumers bought 750,000 traditional policies, eight times what they purchased last year. For the second year in a row, the total number of people covered by long-term care insurance fell slightly as more dropped coverage, died, or exhausted benefits than bought new policies. Roughly 7 million people currently own traditional policies, a number that has not changed in a decade even as the population of those 55 and older (those most likely to buy or use long-term care insurance) has grown by 30 million. 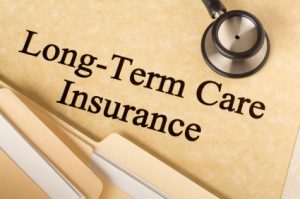 The authoritative industry survey by the actuarial firm Milliman Inc. reported that 17 carriers sold traditional long-term care policies in 2016. Measured by premium, the top two carriers, Northwestern Mutual and Mutual of Omaha, accounted for nearly half of all sales last year. Strikingly, Genworth, the long-time industry leader that generated nearly one-third of all new premium dollars as recently as 2014, sold only 12 percent in 2016. The survey results were published in the trade journal Broker World (firewall).

Average premiums fell slightly in 2016, from $2,497 to $2,480. That may reflect a mix of several factors. They include slightly younger buyers and slightly less generous daily benefits, though the average length of policy benefit period rose a tick from 2015. Consumers also purchased less generous inflation protection, with many choosing a feature known as Future Purchase Option that allows them to buy more coverage in future years instead of getting automatic annual benefit increases.

About 40 percent of buyers bought three-year policies last year. Eighty-five percent bought coverage for five years or less. While most insurers focused on shorter-tem policies, one reported selling eight-year coverage, though those policies accounted for less than five percent of those sold.

One carrier, using a back-to-the-future marketing strategy, sold single-premium lifetime policies. This product, popular a decade ago, allows consumers to make one upfront payment and avoid future premium increases. But nearly all carriers abandoned the design because of the big, and difficult to predict, risks they were taking on.

In 2016, insurers were also underwriting prospective customers more strictly, with more carriers reviewing consumer’s medical and medication records and doing telephone interviews and cognitive assessments. Other research suggests that as many of one-third of those who want to buy long-term care insurance are unable to do so because they cannot pass underwriting.

Traditional long-term care insurance is disappearing as a way for middle-income people to prepare for their personal care needs in old age. It is too expensive for many consumers, and too difficult to buy, especially for those who wait until their 60s when they are likely to have pre-existing conditions that may disqualify them. At the same time, most large life insurance companies — which were once the core of the business — are unwilling to sell long-term care coverage at all.

The rise of combination products suggests that people still want protection against long-term care costs. But without big changes, stand-alone long-term care insurance is likely to play only a modest role in this market for the foreseeable future.

Tips for choosing the Medicare plan that’s right for you

Fall and winter don’t just bring cooler temperatures and the holidays — the final seasons of the year also mean open enrollment for Medicare. For most seniors in the United States, the period between Oct. 15 and Dec. 7 is the only time they can switch or make changes to their Medicare plan insurance.

“As people age, their health care needs evolve,” says Dawn Maroney, chief growth and strategy officer for Alignment Healthcare. “When that happens, they may find the Medicare plan they first chose when they became eligible no longer meets all their needs. This open enrollment period is their yearly opportunity to re-evaluate whether to continue with their plan or switch to another, with changes becoming effective the first of the new year.”

Most Americans are aware that Medicare is a government program designed to ensure people older than 65 have access to affordable health insurance. The program can also cover people younger than 65 who have certain disabilities.

The Medicare program has four parts, according to Medicare.gov: A, B, C and D. 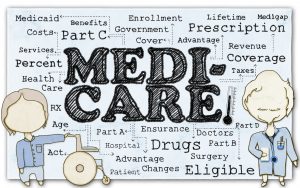 Drawing of Medicare with Stick Men and Clipping Path

* Medicare Part B helps cover care by doctors or other health care providers, outpatient services, some medical equipment and some preventive services.

Most people think of Medicare parts A and B as Original Medicare, in which the government pays directly for the health care services received. People with Original Medicare can see any doctor and hospital that accepts Medicare in the country, without prior approval from Medicare or their primary care physician. Most people do not pay a monthly premium for Part A if they paid taxes while working; everyone pays a monthly premium for Part B, based on income. The standard premium for Part B in 2017 was $134 per month, which is deducted from the individual’s Social Security benefits.

Original Medicare pays for about 80 percent of the total costs of health care. The patient is responsible for the remaining 20 percent, which can mean high out-of-pocket costs in the event of a hospitalization or other events requiring significant medical attention. To offset the financial burden of that 20 percent, some people choose to purchase supplemental insurance, called Medigap.

Private insurance companies offer Medigap to cover things Medicare doesn’t, such as deductibles, co-pays and co-insurance — but, keep in mind, Medigap only supplements Original Medicare benefits. Further, if you do not apply for Medigap in the first six months of becoming eligible, there’s no guarantee that an insurance company will sell you a Medigap policy.

With Medicare Advantage, government-approved private companies administer health plans that cover everything Original Medicare does, but can do so with different rules, costs and restrictions that can change every year. For example, a private Medicare plan may require your physician to request permission before performing a procedure in order to be paid by the plan. Medicare Advantage plans, however, usually cover extras that Original Medicare does not, like dental care, vision services, hearing exams and gym memberships.

When choosing between Original Medicare and Medicare Advantage, you should consider these questions:

* How likely is it your health needs will change down the road? Since health changes as you age, chances are your treatment needs will, too. If you don’t enroll in the additional insurance and drug coverage when you first sign up for Original Medicare, you may pay a monthly penalty for enrolling later and may not be eligible for additional Medigap coverage.

* Are you still working past age 65? If so, you will probably want to enroll in Part A, because there generally are no monthly premiums, and it may supplement your employer’s insurance plan. You might choose to delay enrolling in Part B, but it depends on your health coverage. Everyone has to pay a monthly premium for Part B.

* How important is it to keep your doctor? Original Medicare is accepted by any doctor or hospital that accepts Medicare, without referral. Medicare Advantage plans allow you to select a doctor from the plan network, which is usually very large; your current health care providers are likely to be in the network already.

* Do you regularly take prescription medication for chronic conditions? Prescription drug coverage is not included in Original Medicare, and if you fail to sign up for Part D at the time you enroll, you could pay a penalty for adding it later. Most Medicare Advantage plans do cover prescription drugs.

“Medicare Advantage allows patients to receive the care they need to stay well and keeps their budgets in check with set costs and annual maximums,” Maroney says. “It’s an ideal solution for patients who need frequent care or who struggle to meet medical expenses.”

To learn more about Medicare, visit www.Medicare.gov. For information about Alignment Healthcare and its affiliated Medicare Advantage plans, visit www.alignmenthealthcare.com.

Source: Tips for choosing the Medicare plan that’s right for you

Join us for a FREE seminar to be conducted at Heritage Hills Nursing Center in Smithfield, Rhode Island where we will be discussing the legal issues that must be planned for with seniors.